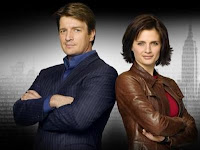 So, in my hunt to find new TV shows worth watching I have stumbled upon (namely been given by a co-worker) this new series starring Nathon Fillion (of Firefly fame). It is not really an original idea.... Crime Writer is enlisted to help the police when his novels are being copied by a real life murderer, but the show is borderline comedy and the roles are well cast. Only 3 episodes so far and only 10 in the first season, but I will keep watching....

Well the Dollhouse has just started getting interesting, wasn't sure if I was going to keep watching this, but Episode 6 peaked my interest and hooked me in. Just getting Episode 7 as I write this.

Well, maybe I will have more to watch than I thought...new Chuck & Big Bang Theory today also.