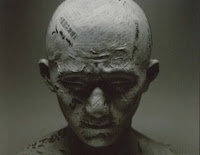 I was going to start another new article section with this film, namely a comparison of Original Vs. Remake. I love Asian horror and I have been mostly disappointed with Western remakes of such, but I thought if I started a comparison review of them it might help me appreciate the remake more. So why don't I?, you may ask... Well, to be honest Premonition wasn't a good enough film to begin with. After watching the original, I didn't really have any desire to see the Sandra Bullock driven remake.

The film starts off well enough with a family traveling home on the highway, your typical work crazed father needs to stop and send some information to his workplace. Whilst waiting in the phone booth he finds a newspaper article that foretells the death of his young daughter complete with photo....with only minutes to go he turns to see the newspaper article come true. His failure to do anything and his obsession with finding the newspaper article results in a marital breakdown that drives his wife away. We then jump 3 years and find that his wife is investigating these theories of newspaper premonitions and with more success than her husband.

She finds a photo from a clairvoyant that leads her to return to her estranged husband and together they investigate the newspaper articles further.

The film does tackle a few interesting themes, my favorite for example; what happens if you try to change the premonition? The film makes no real allusion as to where the paper comes from which might have been nice.

The acting is alright (I find most Japanese films to be either over or under acted; this falls into the former), the cinematography is fine and the visual effects are quite effective. The film also features some nice ambient surround usage and a subtle and appropriately eerie score.

On the whole though, the story could have used a bit of polishing and it doesn't really explain anything very well, but it was still an entertaining 90 minutes so not all is lost.

I promise I will start an series of article on original vs remake, it will just take me a little while to find something worth watching and comparing....I am open to suggestions though!

Posted by Anamnesis at 8:01 AM