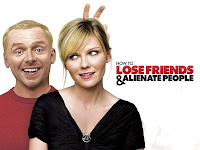 I enjoyed moments of How to Lose Friends et al, but as a film on the whole it left me a little dry. Simon Pegg plays Sydney Young, an ex-magazine owner and journalist who hates famous people and stardom, but yearns to be part of both. We are introduced to him at an awards ceremony where he informs us that should the beautiful starlet (Megan Fox) by his side win a best actress award, he will be rewarded with sex. He does this by breaking the fourth wall (speaking to camera) which I assumed was a technique that would help us to identify with his character. Instead he reminisces, so to speak about how he got to where he is today by revealing events from his past through which we learn that he is not a very likable character at all. This is mostly because he is awkward and out of place in almost all aspects of his life, he does have his "nice" moments (like his meeting Rachel Petkoff), but overall he is just a weird guy . One thing he cannot be accused of though is selling out....at least not until later in the film. Which brings me to the part I don't understand.

The movie goes to a lot of trouble to establish Sydney's rebellion of all the "puff" pieces the magazine does and then suddenly (and with no reasonable explanation) he completely reverses his beliefs and sells out, becoming the very type of reporter he has spent most of the film trying not to be! No explanation is ever given and the somewhat pathetically childish ending of the film does not allow closure of this point. This greatly disappointed me.

On the whole the film is a bit like a roller coaster ride, only one of the predictable ones where what you see is what you get. You know, the ones where you know to expect a loop-the-loop and the sudden drops. Personally I prefer roller coasters that give you a little more than what you can see, the ones that have that whole hidden section in a tunnel or underground that you had no idea was coming.

It is a shame really, because this film could quite easily have gone that way, but instead I am not really sure what they were trying to accomplish.

Posted by Anamnesis at 9:31 AM