Here is the round up of shows I watched this week....

Season 2 Episode 21: Chuck Versus the Colonel
Well from the events taking place in this episode it would seem Chuck is winding down....This may not be such a bad thing. Chuck wasn't a show that I was watching religiously, I simply found it an entertaining way to waste 40 minutes or s0, the story was getting a bit old and predictable and unless they do plan to shake things up a bit, another series seems unlikely.

Season 1 Episode 7: Home Is Where The Heart Stops
This week a rather solid episode of Castle, The team try to solve a series of house invasions that has escalated to murder, we are given further insight into Detective Beckett's past and there was even a great cameo by Patrick Bauchau. I quite like the idea of Castle, but I am always just not sure it is living up to the potential, maybe it is just because I am just to used to the Law & Order series for which this owes a royalty. Speaking of Law & Order.... 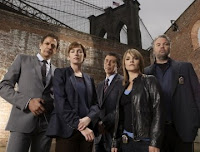 Season 8 Episode 1: Playing Dead
Jeff Goldblum joins the cast of Criminal Intent...which I will be honest and say I have not watched since around Season 4, but hey I like Jeff Goldblum what can I say! Although he isn't in this first episode, I will keep watching to see how he does. I thought this episode might have been better suited to SVU, but it was still OK I guess. I can't believe how much weight Vincent D'Onofrino has put on, he looks very poorly...

Season 1 Episode 3: Ka-Blam
Um...only 1 death this episode...maybe things are slowing down, but at least they are starting to get interesting. Bit crass that everyone seems to be ignoring the disappearance of their friends/guests though.

Season 1 Episode 5: Hugh Dennis
I think that this is such a great premise for a show! Have guests experience things that they never thought they would! This episode was quite funny, again I have no idea who Hugh Dennis is, but he was quite entertaining. He went down a coal mine, read a Jeremy Clarkson book and ate Roadkill! Looking forward to the next one!

There was no Dollhouse or Big Bang Theory this week....oh well. I also started watching C.S.I season 7, but as it is not exactly new I won't be reporting it here. I will say, that the writers obviously have something against Catherine Willows...how much can you do to a character in only 2 episodes!!! sheesh....anyways...that's all for now until next week for more TV.
Posted by Anamnesis at 12:36 AM