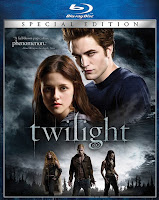 I shall start by pointing out that I have not read, nor do I have any interest in reading the Twilight series of books. This meant that I did not go out of my way to see the film at cinemas and based on some very mixed reviews wasn't sure if I was going to watch it at all. Add to all of that the fact that the movie is about a teenage vampire and his obsession with a human classmate and it does not exactly appeal to my 28 year old male psyche. Of course I appreciate that maybe I am not the target audience for the movie, but hey I still watch the Muppets and I am fairly sure I am not the target audience for them either!

A few issues I have first off: the vampires in this film are "vegetarian"; meaning they only eat animals, not people and apparently they also look like fancy bling bling when exposed to sunlight. They can move faster than a speeding bullet, they are more powerful than a locomotive and are able to leap tall buildings (trees) in a single bound....hmmm

Anyways, Twilight is directed by Catherine Hardwicke for whom this film should have been a sinch. Her first film Thirteen was an amazing look into the world of teen angst and more specifically teen girls, with Twilight we are presented with lingering stares, laconic pacing and some of the most uninteresting dialog put to screen, I can only assume it was the material she was given to work with although she has been kicked off of directing duties for the inevitable sequels.

Well, It should come as no surprise that I did not overly enjoy Twilight, it was certainly not the worst film I have ever seen, but I won't be rushing out to watch any of the sequels. Suffice to say I am sure the audience to which these films are being marketed can't wait!

Posted by Anamnesis at 9:23 AM