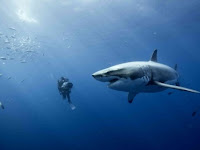 Disney Nature presents a documentary by French filmmakers Jacques Perrin and Jacques Cluzaud with narration by Pierce Brosnan. Ocean's starts by asking the question "What exactly is the Ocean?" to those who aren't familiar with it, it is apparently something you cannot find out about it in a book and must therefore see it for yourself. Well, watching a documentary about it does not exactly mean you have seen it for yourself either. The film is a complete mish mash of various marine life, facts and anthropomorphism which is becoming all too common in documentary films of late. The sad thing is, the film has some incredible footage and could quite possibly have been one of the better documentaries made in recent years! It is let down by an inconsistent storytelling technique that lacks conviction in the message it is trying to send and quite frankly an awful commentary by Pierce Brosnan.

Posted by Anamnesis at 8:47 AM