From producer Guillermo Del Toro and first time feature film director Guillem Morales comes a new Spanish thriller in a similar vein of 2007's The Orphange. Starring Belén Rueda and Lluís Homar the film follows the journey of Julia, who has just been devastated by the suicide of her twin sister Sara seemingly as a result of her inability to cope with a debilitating genetic disease that leads to permanent blindness. A disease that will eventually inflict itself on Julia. Not believing for a second that her sister would commit suicide, Julia and her husband Isaac set out to investigate Sara's death and in the process discover some secrets that may have been better left alone. 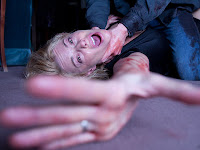 The film is striking to look at with some very impressive use of close up shots and odd camera angles, the colour palette is mostly dark and foreboding giving the images a constant claustrophobic tension that, as the movie progresses, emulate Julia's loss of sight with the use of blurred or seemingly insignificant focal shots and occasionally complete darkness. The sound design is immersive and atmospheric and it is good to see that a film which could have leant itself to many a cheap "loud noise" scare, for the most part avoids doing so. As Julia's sight worsens the sound design really kicks in, giving the audience the opportunity to experience her heightened auditory perception and of course ramping up the tension.

Sadly though, the film is not without flaws and regrettably the biggest flaw is the story itself. Lacking conviction in the journey Julia is making, the audience finds itself subjected to exposition that we are already aware of or worse repetition. This actually made me feel as though the film had been deliberately dumbed down for a "western audience", still this is not a Hollywood feature and even if it is a little predictable, there is enough originality in the film to reward the most discerning viewer.

Posted by Anamnesis at 9:48 AM