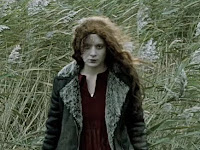 An odd horror film with an almost incomprehensible plot stemming from a weekend boating trip gone wrong. It has ghosts, it has crazy teenagers, it has a man in a rain coat running around with a gun and it may or may not have a monster. The film fails to deliver on almost every level with the odd exception of the acting (odd in that normally the fault with these films IS the acting.) Whilst I appreciate what the film was attempting to do, I have no idea why they have tried to do it in this completely disjointed and uneven way. And then its over and you are left with far more questions than answers.

yet another American remake of an Asian film (Addicted), which, apparently is all Sarah Michelle Gellar is good for these days. The story focuses on two brothers, the usual kind who are complete opposites, one good & one bad.... The good one is married to the girl of his dreams, the bad one wants his brothers wife to be the girl of his too... enter a completely ridiculous car accident in which both brothers end up in a coma. Only when the bad brother wakes from his coma, he claims to actually be the good guy! Hilarity ensues and the plot goes downhill from there... In all honesty, Lee Pace & the cinematography are about the only things keeping this afloat.

Chan-Wook Park's (OldBoy) latest effort is an interesting tale involving a vampire, it is beautiful, bloody and hands down beats anything that involves *sparkling*.

Not Mr. Argento's best work, but gets extra points for having Jennifer Connelly, Donald Pleasence and a Monkey....The idea is not a bad one, it just fails in its application.

For some reason, even though I hated the first Saw...I have kept on watching these damn things right up to this one...though this was better than the Saw V. I do, however, think they are clutching at straws with the lead into part VII though. (hint..you need to watch after the credits for the lead in...)
Posted by Anamnesis at 2:31 PM

We've browsed through your reviews and thought that they are really original and interesting! We would like to invite you to publish your reviews on 7tavern.com, which provides an alternative platform for promising movie reviewers to showcase their talents. In addition, you'll find a growing community of bloggers who share the same passion for excellent movies! Based on the merit of your reviews, we intend to offer you exclusive publishing privileges on our website!