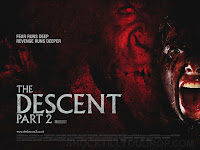 Quite possibly one of the most anticipated releases on my schedule in some time, The Descent Part 2 has taken 5 years to get here, and regrettably, to everyone outside of the U.K has gone direct to DVD & Blu-ray.

Set directly after the first film (The U.S Happy Ending Version), Part 2 sees Sarah (Shauna Macdonald) suffering amnesia and forced by local law enforcement to return to the caves in order to help find her missing friends. Of course, once she and the search party get down there, her memory of the events that transpired slowly returns and things start to go down hill in the usual fashion of blood and violence. Whilst the sequel isn't quite able to capture the same claustrophobic nature of the original, it does bring its own sense of foreboding and does have some genuinely creepy and intense moments. The use of the "loud noise" or "creature visible in the background" scare is a little excessive, but the film sticks pretty close to the rules of the original, which in someways holds it back a little. A few cliche moments aside, there are some great scares to be had, and the violence is certainly more graphic than its predecessor.

Directed by first-timer John Harris (the editor of the original) and co-written by James Watkins (Eden Lake), the film makes great use of the widescreen imagery and keeps the same look and feel of the original. Scenes inside the caves seem a little brighter affording us a greater view of the monsters and their habitat. The score is once again composed by David Julyan and used to great effect with sweeping strings and low bass.

All in all a solid continuation to the story, and as far as sequels go, this is about the best you could have expected and is a must view for fans who enjoyed the original.

Posted by Anamnesis at 9:48 AM