Based on the supposedly true account of the Perron family who were terrorized by a dark presence in their farmhouse in Harrisville. The family enlist the help of renowned paranormal investigators Ed and Lorraine Warren (Of Amityville Horror fame) to help them overcome the horrors that are happening to them. 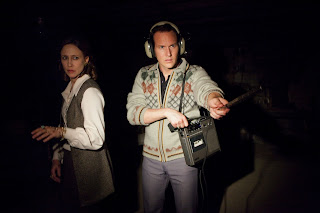 The Conjuring is about the closest thing to an 80's horror film in look and feel that I have seen since The House of the Devil back in 2009.  Whilst it does use a number of obvious horror movie baits, for the most part it is just a genuinely atmospheric and creepy ride into the paranormal.  Director James Wan uses sound very effectively at creating and setting mood, both with the lack of score in certain scenes and the use of low frequencies to create a chilling and almost constant foreboding presence. The film also looks fantastic; recreating both the look and feel of the 70's with aplomb, but where the film really shines is in the actual scares themselves.  Unlike most horror films of the past 10 years or so, The Conjuring is fairly restrained in its depiction of violence and gore and opts instead to just let the nature of the activity build the tension.  Yes it does have some horror elements (you can hardly be possessed without spewing something up), but on the whole the film is a refreshing revival of the old horror lore.

As to the true nature of the story, well I am a sceptic when it comes to these kind of things, whilst I am fairly open to the possibility of ghosts and the like, the artistic license taken by Hollywood is often more laughable to me than frightening. As an example of this - the image below is a doll known as Annabelle, she features in the film quite a bit and is based on this account, however the 'real' Annabelle is in fact a Raggedy Ann Doll (as pictured with the real Ed and Lorraine Warren below that.)


I actually think the Raggedy Ann Doll would have been creepier, but I guess that is just me...

Possession movies are currently the "in-thing" in Hollywood with no less then 10 of them appearing in the last 2 years alone, from your Paranormal Activities to your Possession 1 & 2, even director James Wan has another one out this year with Insidious 2!  If you like scary movies or the idea of at least being creeped out then this film will certainly fit the bill, hell, in the U.S the MPAA was sent the film with the studio expecting a PG-13 rating, what they got back was an R rating and the following statement: "'It's just so scary. There are no specific scenes or tone you could take out to get it PG-13.'" Now if that isn't an endorsement of your horror film, I don't know what is!

Posted by Anamnesis at 7:48 AM

I could see a lot of things and scares coming from miles away, but hey, I still had a good time. Nice review.

I think I may have to check this film out. The trailer does make it seem that is is rather beautifully shoot.

I watch the movie five times and was scare each time. Not a movie to be watch alone. You just don't want to believe this could happen.