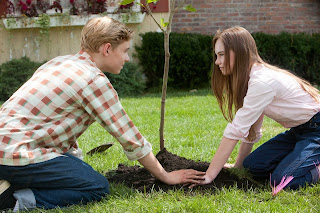 Once in a while a movie crosses my path that I have heard very little about. Usually I always look up the title on IMDB to get an idea of what it might be about or who might be in it etc., but in some ways I am glad I did not do that with Flipped, as I fear if I had, I would not actually have watched the film.

It turns out that Flipped is the latest addition to Rob Reiner's "coming of age" or "revelation" movies ala When Harry Met Sally or Stand By Me. It tells the story of two eighth graders and their relationship from the perspective of each. In other words, we see the first part of the story through the eyes of the boy (Bryce - played by Callan McAuliffe) and then the screen flips to show the same events as seen through the eyes of the girl (Juli - played by Madeline Carroll). It is an interesting plot device and has some great uses throughout the film.

The acting is spot on and the film features a great ensemble cast including the likes of Penelope Ann Miller, Rebecca DeMornay and Aidan Quinn, but it is the two leads that steal the show. Their performances carry the film well above the norm for this genre. It is also splendid to look at with a very ethereal glow throughout most of its running time. It is not without its flaws of course, but these are few and far between and certainly don't detract from the majority of the film that is genuinely solid. I will happily admit that I quite enjoyed Flipped and would more than happily recommend it if you are looking for a light romantic drama slash comedy.

Posted by Anamnesis at 3:50 PM