Well, another week has drawn to a close and some interesting viewing was had....firstly the goggle box..

Self Esteem is Bullshit, at least according to Penn & Teller. Sad to see this weeks episode on Vaccinations will be the final of another great series, one that gave us Teen Sex, Old People and Criminal Justice among others!

Still not sure what to make of The Gates, and that is 7 episodes in!! I am getting a bit sick of the whole Vampire theme in everything though!

I know, I know.... melodrama at its finest! Why am I still watching this?

I know Happy Town has been canned, but I have still been watching it and now only have the final episode left to watch. I hope it has some kind of resolution because I will be very annoyed if it doesn't! I felt this show had some potential, but I guess I must have been alone in this thought.

On the DVD & Blu-ray front I finally watched the Blu-ray of North By Northwest! All I can say is wow! A fantastic film with an amazing transfer! I have seen films made in the last 10 years look worse than this did!! Great job Warner! Really makes me want to re-watch more of Alfred Hitchcock's great films! And with that my Blu-ray copy of Psycho is on its way so I at least have that to look forward to! 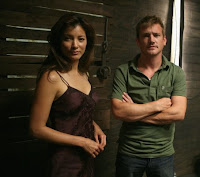 I also watched Farmhouse (2008), not at all what I was expecting, it had some pretty obvious plot holes, but given that is was direct to DVD, it is much better than most movies of its kind and I will certainly not be using my cheese grater anytime soon!

And lastly... those of you who listen to How B Grade Movies Saved Or Ruined My Life will be pleased to see that Friday the 13th did not escape us... we did a show especially for it!!! You can take a listen here!
Posted by Anamnesis at 10:05 AM