This week I spent my time in front of the magic glowing box watching the usual series and some oddities. 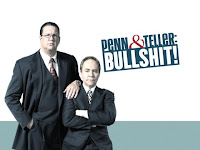 Penn & Teller were up first with their Bullshit episode on Organic Foods. I really like this type of episode that doesn't actually debunk the idea, just the reasons people choose to justify their decisions.

This followed on with the latest Eureka episode in which Carter has to find who is stealing nuclear based power cells.

I am not really sure if I will continue with Warehouse 13. The concept seems flawed and I am not really identifying with the characters as much as I would hope. I may stick with it as none of my other series are starting till September...so we shall see.

Of course the latest episode of Top Gear was in there as well...not quite sure why there were dinosaurs though? but a new episode tonight will keep me occupied :D 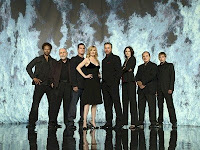 I have also started watching Season 8 of C.S.I just for something new....wasn't a fan of the Without A Trace crossover though....never really got the point of these kind of things?

I have also been revisiting all of the Studio Ghibli films recently, but I am working on a post for that so stay tuned....also reviews of Coraline (3D) and Bruno are on their way...
Posted by Anamnesis at 10:00 AM