New Toys and Additions to the Collection

Well, I haven't been around of much lately, but that doesn't mean I have been entirely out of the game...

I have recently updated my phone from a Nokia 6085 fold phone that has served me well for nearly 5 years!! The update was to bring me into the smart phone era and whilst I had an android phone in mind, I ended up with both a Windows 7 phone and a Symbian 3 phone! Go figure. My main concern was that I really don't like touch screen phones. Something that has unfortunatly become the norm with these kinds of things. I have been a fan of Nokia since 1998, when I purchased my first phone and have stuck with them through thick and thin for around 6 phones now. I really liked the looked of the N8, but again touch screen, so when I saw the E7's full qwerty keyboard, my mind was pretty much made up for me! I know it has a few limitations, but nothing that will impede my uses for it! Of course I have been on a pre-paid plan for a number of years now and that just won't do with the switch to new fangled internet enabled devices so that meant going to a plan and that meant receiving another phone. In this instance the HTC Mozart Windows 7 phone. I kind of hate it (it is touch screen), but there are certainly things I like about it. Anyhow, both have been tested over the last few days and I must say I really am loving the E7. Awesome build quality, great to use, much quicker than I was expecting (although there are a couple of "quirks"), but on the whole a great user experience. The same cannot be said for the Mozart. I really wanted to like it, but I have had display bugs, fits of rage at the touch screens outright refusal to recognise that I have touched it, not to mention the auto correct that seems intuitive at first and then becomes downright insulting.

Anyhow, here is a gander at them: 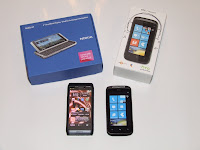 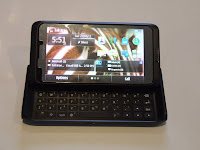 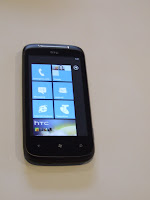 I will add a more full review of the phones once I have used them for about a week or so....

And now for something completely different in the form of a few new additions to the Blu-ray collection that I had not reported earlier: 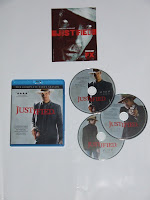 Justified Season 1 from the U.S, awesome series!! A little like someone making a series out of Winter's Bone only with more humor and Timothy Olyphant. Great cast, great writing and looks awesome in HD!!! Check it out if you can! 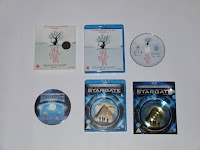 Next up we have Stargate: Ultimate Edition and Let the Right One In. It took Amazon 3 goes to get that order right.... they continually sent me the original release of LTROI.... much to my annoyance, but hey.. it ended up costing about $8 so it was quite the steal!! As was Stargate from CDWOW for only $7 (used a coupon) Stargate also marks my first Blu-ray double dip as I own the previous U.S Lionsgate release, but this is quite the improvement!

Anyhow that is the news for now, I will be updating the How B Grade Movies Saved or Ruined My Life section of the blog later in the week as I plan to incorporate all of our Writer's specials into one post, but if you can't wait simply head over to the site to take a listen!
Posted by Anamnesis at 6:25 PM