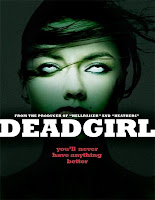 This film is morally reprehensible and yet sadly, could be a coming of age film for the masses who seem to treat everything in life as a commodity - people included. Despite a supernatural story element that defies explanation, the morality of the movie and its sexual and violent objectification of women in frighteningly plausible extremes is shocking to say the least. The scariest part is that you know people would relate to both of the main characters differing views and I guess on some level the film is making an attempt at some form of social commentary, despite how majorly it fails. If the film was a little more intelligent and explored some of the themes it attempts a little more deeply it may have been more interesting, but as it stands this is a tasteless and sickening film that will leave you with imagery that you will not quickly shake off.
Posted by Anamnesis at 10:22 AM