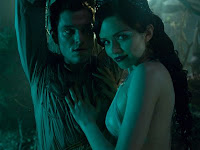 Sadly, Lesbian Vampire Killers is not as much fun as its title would have us believe. A small English town has a curse placed on it by a vampire queen. The curse ensures that all of the towns womenfolk after turning the ripe old age of 18 become enslaved by lesbians that also happen to be vampires. The townsfolk keep the lesbians at bay by sending tourists and presumably people they don't like to a cabin in the middle of the forest as what I can only guess is a sacrifice. Fast forward to present day and 2 friends head off for a hike in the countryside and happen upon the aforementioned cursed town. After watching a VW van full of hotties depart the local drinking establishment the boys think they have hit pay dirt, but of course we know better.

Lesbian Vampire Killers tries very hard to establish a style of its own, but we are not presented with anything that hasn't been attempted more successfully by other films, even the main characters are very reminiscent of other more superior character roles!. The 2 male leads for example are just a poor mans photocopy of Simon Pegg & Nick Frost's characters from Shaun of the Dead. Paul McGann plays a priest trying to protect his daughter who is about to turn 18, he is also the films main source of exposition and yet appears in a series of plot extensions that seem to serve very little purpose as well as being the stereotypical priest with the know-how. I appreciate the air of B-grade tongue in cheek humor that is present, but it just doesn't live up to even B-grade standards. I should also point out that the vampire queen is supposed to be Camilla, a vampire that out dates even Dracula and has also appeared in countless movie outings.

Well, maybe my expectations were a bit high, but I was quite disappointed with Lesbian Vampire Killers. It is not the worst film of the year, but I wouldn't rush out to see it in cinemas.

Posted by Anamnesis at 7:57 AM