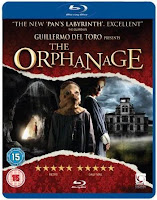 Whilst I did see this film in cinemas for some reason it never got a review, which is a shame as I would like to have re-read my opinion before sitting down to watch the Blu-ray.

I do remember that I liked it very much. That opinion hasn't changed.

The Orphanage is a visually and aurally arresting film, from the producer of Pan's Labyrinth and The Devil's Backbone (both superb films incidentally) we are treated to a wonderful ghost story that is as terrifying as it is devastating.

Laura brings her husband and adopted son to the orphanage where she grew up in the hopes of starting up a home for special needs children. During their first nights at the orphanage Laura's son Simon meets some new imaginary friends who like playing games. During a party for the opening of the new home Simon disappears and his imaginary friends may not be as imaginary as first thought as the secrets from the orphanage's past are revealed.

As I said earlier, I saw the film is cinemas and I must say this Blu-ray is a stunning presentation, however some scenes seemed to be a lot darker than I remember with limited shadow detail for a high definition presentation.

The audio on the other hand is flawless. A completely expansive yet immersive experience. The score is beautiful and subtle when it needs to be. The sound design is creepy without being silly or over the top.

There are quite a few extras on this British release including deleted scenes, making of and a few other short bits of behind the scenes information.

The Orphanage is a brilliant film that leaves you with very mixed feelings. It is a ghost story that might not even have ghosts (an argument I have noted elsewhere on the net), but it is certainly not for those looking for a light hearted evenings viewing.

**Note** I have opted not to include the trailer as it shows a number of spoilers that would be best not seen before viewing the film.**
Posted by Anamnesis at 12:10 AM