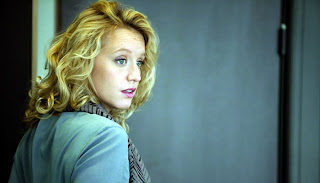 Asian cinema has been a leader in revenge story thrillers for the past few years, most violently so, it was a nice change to get to sit down with a more methodic revenge thriller in the form of Love Crime, I must say that this film took me back to my Cinematheque days spent watching new wave French cinema from the likes of Francois Trauffaut, Jean Luc Goddard and in this case more specifically the great Claude Chabrol.

I am talking specifically about the French thrillers where characters and their motives are more important than gratuitous gore and violence; something that has become inherent in the thrillers of late. Love Crime bears a number of similarities to the films of Chabrol, from its strong lead female cast, to its thoughtful pacing and even the sad fact that both Charbol and Comeau passed away last year. 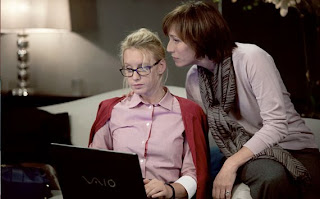 Christine is a successful corporate account executive who wants to get to the top and is ready to do anything to get there. This includes taking the credit for the work of her assistant Isabelle. When Isabelle realizes what is going on the two women play a dangerous game of cat and mouse in an attempt to one-up each other, a game that doesn’t end well.

The performances by both leads is strong, however neither character is likeable which created a problem for my investment in where the characters were going. The elaborate and frankly way over the top second half of the film muddies what is otherwise an interesting premise and the outcome is regrettably just as predictable. Love Crime is still an entertaining film and one especially worthwhile for those interested in character driven thrillers or those who like the French new wave thrillers of which this could certainly have been one.

Posted by Anamnesis at 8:26 AM