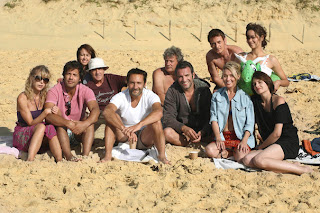 Max owns and runs a successful hotel and restaurant. Every year, he and his “new age” wife invite a group of their friends to their beach house in the south of France for a vacation, only this year tragedy has struck mere days before the start of their holiday. Ludo, one of their long standing friends is injured in a horrific scooter accident and the group must decide if they should cancel or at the very least cut short their annual pilgrimage. After deciding to spend only 2 weeks at the beach house while Ludo recuperates the holiday ends up being anything but relaxing as each of the guests deal with all of the little lies and truths that unravel amongst them… so many secrets kept for so long and as tensions mount things start getting a little out of hand.

First thing I will get out of the way here is the films running time. Yes it is about 1/2 an hour shy of a 3 hour epic and for most of its duration the film is nothing more than faces and dialog, but the question I would ask of any criticism regarding this is what would you cut? Whilst I felt the film was a little slow to get on its feet, once you have established who is who and what is what things start to fall into place and the film is able to make use of the breathing space it has afforded the characters. All of the actors are perfectly cast and you truly believe that this group of people have known each other for years.

However films of old have been there and done that and Little White Lies reminded me a lot of films like Peter’s Friends or The Big Chill in which a group of long term friends meet and greet and everything falls apart, but whilst it may not be the chocolate biscuit in the jar it certainly has a lot to offer.