I always regretted not seeing the original Cars movie in cinemas, the trailer didn't do anything for me so I decided to give it a miss and when I did get around to watching it on DVD I really quite enjoyed it.

A similar thing happened to me with Cars 2, the trailer didn't inspire me, but as I was asked to review it I went along anyway.. I mean it is a Pixar movie so how bad can it be?

I certainly find the story of Cars 2 an interesting choice for this sequel, it sees Lightning McQueen (Owen Wilson) relegated to a bit part whilst Mater (Larry the Cable Guy) steals the show in what can only be described as a James Bond homage. Secret Agent Finn McMissile (Michael Caine) is on a top secret mission to find out who is behind a massive secret oil drilling operation in the middle of the ocean. By an unlucky twist of fate Mater is confused for an American spy and together with Finn and his associate Holly they head off to Paris in search of a spare parts dealer that might help them. Meanwhile Lightning McQueen has taken up a challenge to race in a world cup using a new environmentally sustainable fuel known as Allinol, but as race cars start to explode on the track, there are some doubts as to weather the fuel is as safe and friendly as first thought! 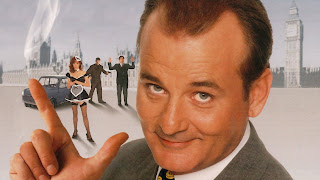 Cars 2 reminded me in some ways of the Bill Murray film The Man Who Knew Too Little from 1997 in which the main character is mistaken for a secret agent and yet, by pure luck and further misunderstandings ends up being better than the real thing, much like Mater in the former, but I found that throughout the movie I was constantly asking myself, why is this a Cars movie? John Lassester made a fairly major executive decision when Pixar moved in with Disney, he stopped them from making any further sequels to all of their classics and whilst that was great, I can't help but feel that Cars 2 makes him a little hypocritical and I also can't help but feel it could have been done with characters other than cars.

Cars 2 is the complete opposite of its original counterpart in that here we have cars behaving more like humans and in an environment that makes little sense when compared to the first. I do enjoy Pixar movies and I don't think Cars 2 is the worst film they have made, but I certainly didn't enjoy it as much as I have their other films and I think it is a shame to see them now making so many sequels to their titles rather than creating original content.