Well I got a bit carried away on the long weekend and thus no updates ensued....

Anyway, I thought today I would show some of my Korean Limited Editions, this has mainly come about thanks to The Uninvited, which started in theaters over in the U.S and which happens to be a remake of one of my favorite Korean horror movies... take a look at the trailer below...

So the original film is called "A Tale of Two Sisters", there have been a few releases around, but the first 1500 of the 2 disc Korean Edition came in a nice digipak with a film cell.

I also have a soft spot for Kim-Ki Duk, who churns out almost 2 films a year... below are a my 2 favorites... 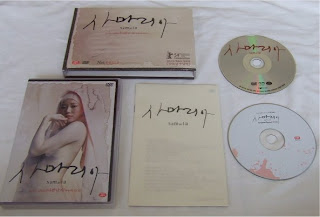 I also invested a little in the "Girl's High School Horror" series, whilst I could not find a limited edition for Whispering Corridors...Memento Mori and Voice both managed to get the LE treatment. I did have Wishing Stairs, but it was the least worthy of the series so I sold it...ce la vie...

Whilst I could add quite a few more, I think I shall save them for a horror movie post a little later down the line...

I saw Changeling over the weekend so expect a review of that some time in the next days or so....
Posted by Anamnesis at 8:09 AM