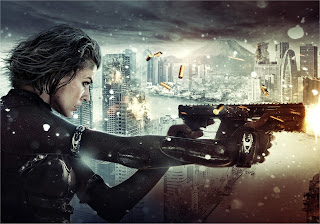 The Resident Evil franchise has been a bit hit and miss at the best of times, the hit factor was certainly more of a surprise than the miss. For my part, the first film was great entertainment, the second was a massive let down, the third surprisingly better than the second and Afterlife was the best of the sequels thus far. It was the latter film that gave some hope for its continuation in this 5th installment.

Paul W.S Anderson returns as both writer and director, his wife Milla Jovovich also returns as seminal hero Alice as do a number of the cast from the previous sequels, but a little more on that later.

The film starts with a wonderful slow motion action scene depicting in reverse the events on the Arcadia up until the end of the last film  We are then treated to the same scene moving forward in real time, a scene that will see Alice get blown off the Arcadia and into the sea.

She awakens as a wife and mother in a suburban environment in which the world seems normal, normal that is until a zombie attack occurs! During her escape from the zombie imposters, her husband Todd (Oded Fehr - who is in fact Carlos Olivera from the third film) is killed and she bumps into Rain (Michelle Rodriguez from the first film) with whom she continues her escape, albeit a short attempt as they soon crash and get knocked unconscious. 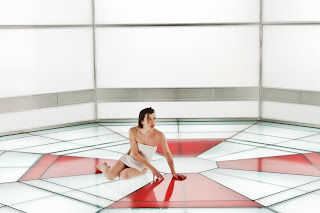 Once again Alice awakens, this time as a prisoner in an Umbrella Corporation holding facility wearing her contractually obliged "white blanket" (see above) in which Jill Valentine (yes the one from the second film who is basically unrecognizable in this film) under the control of The Red Queen (yes the annoying child minded A.I from the first film) attempts to glean information from her. Suffice to say she escapes once again, this time with the help of the bad guy from the last film who apparently is now a good guy in this film and well... you see where this is going....

OK, the real shame about this installment is the potential this film had to be brilliant! We learn that Umbrella have created a massive testing facility in the arctic circle that contains minutely detailed recreations of Tokyo, New York, Moscow and Racoon City for the purposes of testing the impact and spread of the T-Virus.  How awesome would it have been to simply make one or all of the previous films simply a simulation!!  The potential was there and only lightly touched on using the Tokyo opening from the previous film. We have bascially all of the major characters from the previous films returning with only the simple explanation of them being clones (something we previously only knew about Alice).  This strengthened the idea that the first or second films could simply have existed as a mere figment of a clones life. 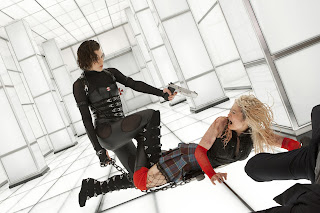 Unfortunately the film makes absolutely no attempt at using my awesome idea above and instead ops to just provide what can only be considered 2 hours of watching someone play a video game using only cut scenes that don't explain or relate any of the information you require to make any kind of sense of the film.  That is of course, if you could even consider this piece of work a film, but there are others out there who clearly explain this better than I....

Posted by Anamnesis at 1:14 PM