Snakes...Why did it have to be snakes?

That's right folks Indiana Jones has finally come to the Blu-ray disc format.  Whilst I had intended to pick up the super duper limited edition, it turns out that it will not be released for another month yet, so whilst I normally would wait, I was actually quite happy with the local standard release.  This is the JBHIFI limited edition set that comes with a film cell (as seen above) And here is the rest of the set: 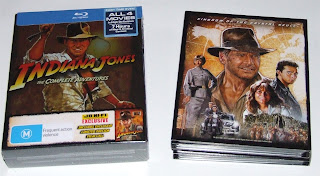 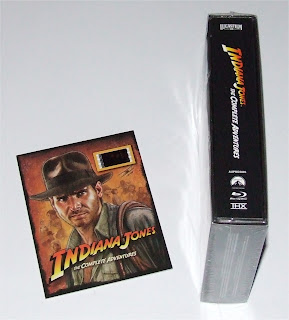 I sat down and watched Raiders of the Lost Ark and I must say the first 1/2 hour had me a little perplexed in terms of picture quality (something about it seemed a little off, but I can't quite put my finger on it) and I am not too sure how I feel about having the score mixed into the surround channels the way they have, but after that first 1/2 hour thing were vastly improved in the picture department. Suffice to say Paramount have come out in defense of the opening scenes stating that it is the first time they have been restored to their original colour palette, which makes sense given that I couldn't actually tell what felt wrong about it and the transfer quality itself was fantastic.

Having come from VHS, then Laserdisc and then DVD, I can certainly say that this release is definitely the best Raiders has looked on a home media format that I have seen. It is also the first time I can recall the opening credits not being a cesspool of moire effect!  Now I just have to make the time to watch the rest!
Posted by Anamnesis at 8:07 AM