Next Wave of Ghibli Blu's 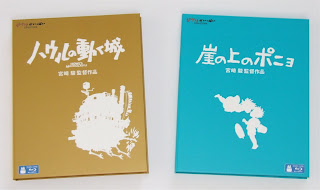 Well I received the first two blu-ray's from the next installment from Studio Ghibli (The third is still en-route).  I present Howl's Moving Castle and Ponyo!  I watched Howl last night and I must say this is a fantastic disc, the picture quality is leaps and bounds ahead of the DVD I had. The 6.1 soundtrack is magnificent to behold and truly places you right in the midst of the story and action as it unfolds.  I must admit upon my first viewing of Howl I wasn't all that impressed, but as I re-watch it, I am coming to like it more and more (Hopefully the same will occur for Tales From Earth Sea, which I also didn't care greatly for on my initial viewing) 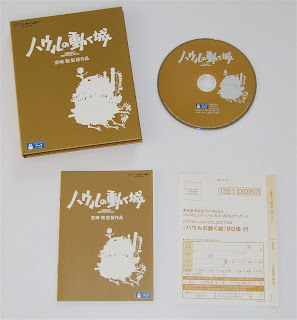 I haven't had a chance to watch Ponyo yet, but I did have a quick look at the disc and I must admit I am a bit disappointed that it is simply a re-hash of the original release. Whilst it is nice that the cover now matches the rest of the releases, it is a shame the disc contents are set out completely different and not in keeping with the theme from the others.  I guess maybe it was a little too much to ask, but I was hoping Studio Ghibli may have obliged us.  Oh well, it is still a great film and an excellent addition to the collection! 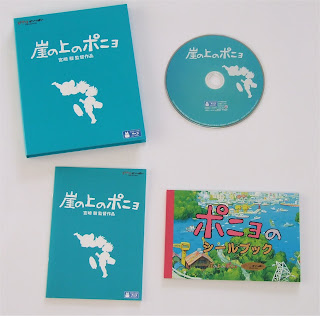 Now the waiting game for the next wave starts!!
Posted by Anamnesis at 9:16 AM

Hi! Just found your site. Very informative. Was wondering, does your Nausicaa case not have the magnetic close design like the others? Thank you!

Interestingly your comment has only just popped up on my radar.

Yes Nausucaa does feature the same design, however, it is larger to accommodate the little book that is provided. I can post more pictures if you wish?