I guess you can't really say that if you sit too close to your TV you will get square eyes anymore...instead you will get widescreen eyes!

I won't really reveal too many plot points here just in case people have yet to seen them, mostly I will just give my opinion of the episode.

Anyway, the weekends TV viewing consisted of a new episode of Pushing Daisies (FINALLY!!), the latest Harper's Island and a British entry in the form of FM, but first.... last weeks episode of Dollhouse. 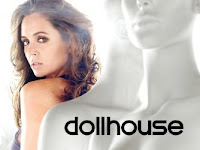 Season 1 Episode 9: "Spy in the House of Love"
So the unthinkable happened....Dollhouse had 2 decent episodes in a row! Told in flashback form from multiple viewpoints, this episode had quite a few "reveals" and was quite enjoyable! There is hope yet! I believe the series is taking a break this week so lets hope the next episode keeps things interesting.

Season 1 Episode 2: "Crackle"
Now things are starting to speed up on this island horror as well....is John Wakefield really dead?...why is Shane such a dick? Who is bumping off all the wedding guests? well, I must admit it is a bit "soap opera" for me, but I am going to keep watching anyway....if for no other reason than to see all the characters die.

Season 2 Episode 11: "Window Dressed to Kill"
ITV has aired the 11th episode of Pushing Daisies and an interesting episode it is too. Nice to see some of the relationships within the major cast get a workout, sadly that only leaves two episodes left before the world of PD is over. You have to feel sorry for Bryan Fuller, none of his shows have made it past the 2nd season. (Dead Like Me did make a direct to DVD comeback, but that doesn't really count) I am going to assume that not much is going to be wrapped up in the final episodes though...which is a shame. (I believe they have aired in Italy of all places, but interestingly there are few spoilers about)

Season 1 Episode 1: "Last Night a DJ Saved My Life"
Still in Britain (and yes I know Pushing Daisies is American, but that episode aired in the UK first!) and I watched the first episode of FM. It does bare some resemblance to I.T Crowd, but was still quite funny and I am going to stick with it for a bit (I have all of the first season)

I also watched a French thriller, Criminal Lovers (Les Amants Criminels) which I shall review either tomorrow or Wednesday, it was okay and had a few interesting twists.
Posted by Anamnesis at 10:32 AM