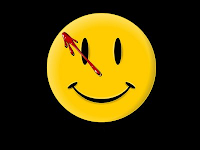 I will start off by saying that I have not read the graphic novels on which this film is based. In some ways I feel I should have as there is obviously a lot more going on than what is explained in the movie. This is not to say that I didn't enjoy the film, quite the opposite in fact! Set in an alternate 1985 where Superheroes are an everyday occurrence and America won the Vietnam war with thanks to one. We are presented with a noir style detective narration by a hero called Rorschach who is investigating the death of one of the most well known heroes, The Comedian. This sets the movie off on an action packed and sexually charged adventure told with outstanding visual style and seamless and breathtaking effects as his investigation leads to the possible annihilation of mankind. The film is certainly violent and makes no attempt to dull it down or make it seem more comical than it should be, something I admire in these types of action films. If I had any complaint it would be that the pacing seems a little off in parts and thus the running time seems a little extended. There are also a few scenes with unexplained incidents that lead me to believe had I read the novels I would have understood them.
Despite this, the film is thoroughly entertaining and definitely one to see on the big screen. I just wish I had an Imax cinema close by!!