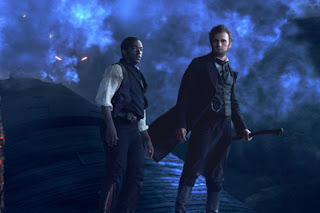 Whilst not an unoriginal idea, this film fails purely in application.  The acting is rubbish, the dialog should have been shot at birth and the over abundant use of "bullet time" slow motion just makes the length of the film all the more painful. It only goes for one hundred and five minutes.

We are set up to believe that Abe's Mother was killed by vampire and plantation owner Jack Barts, A number of years after her death Abe seeks Barts out and during a momentary lapse of  revenge he himself is saved from an untimely fate by vampire killer Henry Sturges.  Sturges takes Abe under his wing and teaches him how to fight and kill those nasty creatures of the night, that incidentally somehow now walk in the day and can only be killed by silver... (thought that was werewolves, but anyways).  he is told that he should not make friends or family and yet he meets Mary Todd who creates his exception to the rule.  He is also told about Adam, the creator of all vampires and the one he must seek out to destroy if he wishes to rid the United States of its vampire scourge. 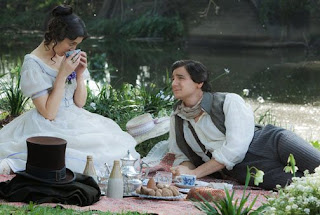 I went into Abraham Lincoln: Vampire Hunter with some hope for entertainment, instead I actually wish I had chosen to see The Sapphires instead...  which is a shame as I think director Timur Bekmambetov has an amazing visual talent, and this film is very visual, it is just everything else that doesn't work and basically hasn't worked for him since he has been Hollywoodized.
Posted by Anamnesis at 3:41 PM

Hey, just contacting you for the LAMB. We're looking at creating a list similar to Sight and Sound's greatest movies of all time and in doing so, need emails!