Wes Craven has been a master of horror for some time. He is responsible for many a sleepless night with thanks to Freddy Krueger, he has had his films remade numerous times by the money hungry studios and with the first Scream film, he single-handedly redefined the teen slasher and horror genre. One of the things I like most about Wes, is his ability to put a fresh perspective on an already overdone theme. Just look at his reclaiming of the Nightmare series with possibly the best sequel to the whole franchise. He has dabbled in werewolves, vampires, zombies, rednecks and violin teachers (no joke). Whilst the Scream series has countless die-hard fans, I feel that it is still under-rated by the general populace. Its recent arrival on Blu-ray in Germany has afforded me the opportunity to revisit the series, and I must say the films hold up remarkably well. 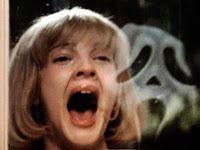 Scream (1996)
From its memorable opening to the final showdown the one thing you can say about Scream is that it was unlike anything seen before it. Whilst there are many slasher films around, so few challenged its audience with an intelligent script (c/o Andrew Williamson) superb casting and enough tension that even a knife won't cut through it. Whilst the story is hardly anything new to the slasher genre, serial killer stalks young nubile victims, its application and self referencing was refreshing and unexpected. There are a few scenes that date the film a little; "What are you doing with a cellular telephone, son?", but otherwise the film stands on its own even by today's standard.

Scream 2 (1997)
Kicking off with another great prologue Scream 2 enters the franchise with an interesting subplot about life imitating art. The casting is great with a number of (then) rising TV stars amongst them, the returning cast are good too and certainly build up on their existing characters. The self referential jokes are also still in full swing, but the film is bogged down with typically annoying cliche, even if it is on purpose. But, I guess If the killer spent more time killing than explaining their motives the film would have been about 1/2 an hour shorter (which might have tightened it up, given its 2 hour running time). With that said, the sequel lives up to the original in its inventiveness, something for which the whole series can be proud.

Scream 3 (2000)
Possibly the weakest link (as third films so often are), Scream 3 lets us know early on that all bets are off! Somehow the killer has now found indestructibility, and whilst we know this is still a reference to the countless horror films before it (as the exposition details), it is just a shame that the movie has far too many impossible disappearing/re-appearing killer tricks for its own good! The story is also a little convoluted with a number of dead ends (no pun intended). Basically the film feels like it is trying a little too hard to live up to its predecessors and whilst it is certainly not the worst 3rd film ever made in a trilogy, it is not the best either.

The Future of the Series....

Well, after a 10 year break it would seem Wes Craven is returning to Woodsboro to bring the Scream Trilogy into an Anthology. This has quite a big cast including the main survivors from the last three films, of course this aims to do for the genre what the original did way back in 96, if it succeeds no doubt a whole new era of slasher films will ensue.
Posted by Anamnesis at 9:59 AM