Over the last few weeks I have been revisiting some old, catching up on some new and experimenting with the unknown... here is a run down of some of my recent viewings.

oh dear... I usually refrain from watching these kind of reboots. I have such fond memories of the original series when I watched it back in the day. I would hate to think I would lose that. Sadly, there were not many things I liked about this. The film is missing most of the heart of the original series, it feels very disjointed and is not helped at all by the awful voice casting. I kinda wish I hadn't watched it. I also note that the Blu-ray in Australia is actually in the wrong aspect ratio, so I can't even recommend that! 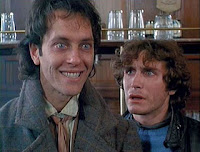 Easily one of my favourite films of all time. Withnail and I has received a Blu-ray outing in Australia, and what a fine disc it is too. I had the previous Criterion Collection release of the film and it was pants, this Blu-ray runs rings around it. If you have not seen the film, I cannot recommend it enough, and I guarantee if nothing else, that you will be quoting from it for years to come!

Actually better than I was expecting (even more so after having watched Astroboy), I am beginning to take a liking to Sony's new animation front... with this and Cloudy With A Chance of Meatballs both exceeding my expectations I shall be watching them closely.

A lovely, but sad tale about self discovery and love. Whilst the timeline can be a little confusing, the acting, script and cinematography are all superb, I was a little let down by the rather abrupt end though.

One of Joel Schumacher's better efforts, having watched it again I am pleased with how well it stands up to multiple viewings...it did however, make me ask what has happened to Colin Farrell lately?

Not an altogether awful film, I mean there is only so much you can do with this sort of material (basically Jaws with a crocodile), but it does have some decent scares and a few tense moments. With a great cast it is let down mostly by a silly ending....
Posted by Anamnesis at 1:47 AM