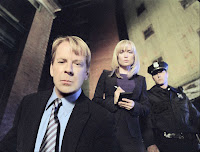 It has to be said that on the outside Surrogates has an interesting idea of the future. And for the most part it works, provided you don't dig any deeper than the surface. Based on the graphic novel by Robert Venditti and Brett Weldele, it follows FBI Agents Greer (Bruce Willis) and Peters (Rhada Mitchell) as they investigate what may be the first homicide in countless years since the introduction of Surrogates.

A surrogate is basically a robot avatar that can appear however you want it to, for most major cities in the world they have become the norm, with people choosing to lead their entire lives through their surrogate. Those that don't, live in "Dread Zones", camps set up by and for humans only, these folks are led by The Prophet who appears to secretly be trying to destroy all of the Surrogates, and he has the help of a new weapon to do so.

The plot is a little involved, but the film wastes no time in getting to the action scenes and we learn that all might not be as it seems.

On the whole the film creates an interesting future world view with a unique visual style and if you are after a little science fiction action then it may well be worth your time. If you want something a little deeper though, then perhaps look for something else.
Posted by Anamnesis at 8:45 AM